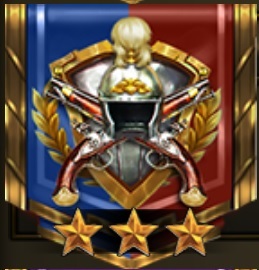 In July 2018 the Ultimate Alliance Campaign event was first introduced in Guns of Glory. This guide provides a basic explanation.

Basic explanation of the new Ultimate Alliance Campain, with some simple example how to attack (and fail miserably).

This event is held every two weeks (exceptions for special events) and five days before it starts the r5 of an alliance can register the allliance to participate in the Event Center.

An alliance can only register if they are in the top 10 of their kingdom and have at least 30 active members in the past 7 days.

From the alliances that participate your alliance will be matched up with alliances from other kingdoms similar in power. We participated once and where linked with 6 other alliances (all from different kingdoms).

When the event starts you can teleport for free to any of the kingdoms of the alliances your alliance is matched up with. You will automatically teleport to a location as near to the opponents fortress as possible.

You do require a teleport to move within the kingdom.

When you are done in a kingdom you can go back Home (by selecting Home in the interface), if your spot is available your will teleport back to the spot you came from, otherwise it will be a location as nearby as possible.

You can only attack your target alliance.

All troops lost during battles will end up in the Kingdom Hospital, this includes the troops lost while attacking or defending alliance buildings.

Troops in the Kingdom Hospital can be healed without using resources, either wait a reduced time, or pay a relatively small gold amount.

Via the Ultimate Alliance Campaign interface (accessible via the icon on the left of your city view) you can select an Alliance, click Location and pay 1000 gold to track opponents on the kingdom map.

You can only Defend or Plunder one Alliance Building at a time (although it does seem to be possible to join a rally to take back one of your Alliance Buildings being plundered and when you are successful your troops will stay behind to guard the building, effectively allowing you to guard Treasure in two different buildings).

At the start of the event the castle, alliance towers and strategy center of all participating alliances will be filled with 100k Treasure.

Each of the buildings with Treasure have a new menu items with the name Treasure. You need to use these new menu items to plunder and defend Treasure. Having troops garrison a building in the conventional way does not prevent the Treasure from being plundered.

Any Treasure taken by you in another kingdom will be automatically added to your own Alliance Buildings.

When you look at the Details menu after the Treasure Details menu, you will see which combat buffs apply for the defending and plundering alliances. These are determined by how much the Treasure is over or below the initial capacity of 100k. These combat boosts are for Attack, Defense and Health only (no damage or damage received), but they become huge. This means for defending alliances it becomes relatively easy to defend buildings from which a lot of Treasure has been taken and relatively difficult for buidings containing a huge amount of Treasure. For attackers it is the opposite.

Also the plundering speed becomes lower the less Treasure is in a building and higher when there is an over capacity.

The Alliance will get rewards based on the ranking, which can be distributed to individual players by the r5 (and will be received via mail). The Alliance Rewards are the same for ranks 2 and 3, and for ranks 4 to 7. There are also individual rewards that everyone that particated will get based on the alliance ranking (glory banners, refining stone (II), and 60m speedups, amount depending on the alliance rank).

Example of how you can score individual points fast by plundering alliance buildings with high treasure and using fake rallies to keep your remaining troops from being killed.

Players can get rewards by reaching certain point milestones. These points are different from the ranking points for the alliance, the individual score points are acquired by defending and plundering Treasure. These milestones can be seen, and rewards can be claimed, via the Ultimate Alliance Campaign interface in the Event Center. There is a Campaign Rewards button at the left top. These rewards include 10 Aristocrat Badges, 100 Craftsman Tools, 270 glory Banners and more.

The attack, defense and health buffs are compensated in the Alliance Buildings when you are low on Treasure, but damage and damage reduction buffs not. I was already convinced I should put my focus on Damage and Damage Reduction buffs for further development to my account, and for this event this seems even more important than for general combat.

I like this new event, it gives a possibility to get experience with combat, alliance vs alliance, without the risk of losing all your troops. You need to show some self control though to not keep healing your troops again and again, as the gold expenditure can gets huge. The combat compensation buffs in the Alliance Buildings feel artificial, but they do allow you to battle much stronger opponents when your alliance is low on Treasure, so they are nice in a way. Together with the rule to only allow for one march at an alliance building, you still stand a chance against an alliance with one or a few very strong players.