Types of monsters available in Kingdoms of Heckfire and how to deal with them.

In Kingdoms of Heckfire, aside from fighting other players you also need to be able to fight against monsters. You need to be able to successfully kill invading monsters in your kingdom screen so you can have access new build spaces on which you want to build your structures upon, and you also might want to raid realm monsters in the realm screen to get more resources and more experience points for your dragons.

That required power level can be met by doing research on Dragon March technology to enable sending out more troops per march, upgrading your Training Pit and doing research on better type of Troops more suitable for attacking monsters, upgrading your dragons and equipping them with better relics, and hiring allies in the Waritorium that impart good bonus stats on the soil type where the target monster lives.

There are 3 basic monster types in Kingdoms of Heckfire, and each of those monster type has an advanced monster form as well called the Titans.

The 3 basic monster types are:

And for each of those type there is a Titan form as well, which basically has a lot more Health Points than the basic form, gives out a lot more resources than the basic monster types when raided, and when the Titan died it spawned several Jewel nodes which players can collect, too. Each of those monster type lives in different types of soil, and it is a good idea to research technologies and hire allies that will give certain bonuses when fighting monsters according to the types of soil they live.

Goblins live in Grassland type of soil, and thus are affected by hired allies and research technologies that impart bonuses when fighting Grassland monsters. 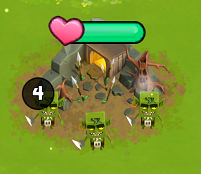 Skeletons live in Badlands type of soil, and thus are affected by hired allies and research technologies that impart bonuses when fighting Badlands monsters. 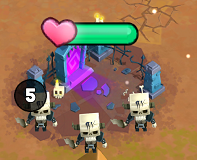 Treeants live in Swamp type of soil, and thus are affected by hired allies and research technologies that impart bonuses when fighting Swamp monsters. 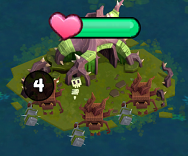 These titans live on the soil type according to their respective names, they are spawned randomly throughout the realm screen from time to time, and they also have different power level. To be able to attack Titans, you only need to research technologies that allow you to attack them according to the Titans’ power level; which is slightly different than when you want to attack the basic monster types that also requires you to have the minimum Troops power in addition to having completed the necessary research to attack the target monster level. Taking down a Titan is very, very tough to do alone, it is much better to coordinate hitting the same Titan target with clanmates.

Dealing Wisely with the Monsters

Realm monsters are spread throughout the realm and they make nests or lairs. You can raid their lairs for more resources, dragon relic pieces, increasing your dragons’ experience points, and chances at jewels.

Pay keen attention to the current location of your kingdom in the realm, as there are daily events which involves in killing different types of monsters for rewards, ideally you want your kingdom to be situated not too far from the other 2 types of soil as well, aside from the soil type your kingdom is currently situated at. If necessary, teleport your kingdom to the location in the realm which you think is the best location to stay for a long time. Ideally, this should be coordinated also with your clanmates as well, as it is much better to move into a new location with as many clanmates as possible forming a hive cluster than to move alone. Singular player in the middle of nowhere always invites attacks and are bullied more often by stronger players and stronger clans. That is why it is better to join a good clan as early as possible, and move together into a new location to form a new hive cluster.

Make sure to train Troops constantly from time to time, and once the technology is available the try to switch to specialized troops that does more damage to monsters. Upgrade Troop strength and toughness, research Dragon March technology to enable you to send out more troops per march. Upgrade your dragons, make them accumulate experience points faster through constant upgrades on the Dragon Spire and also build and upgrade multiple Dragon Altars as well to make your Dragons accrue more experience points per mission they are doing. Increase your Dragons’ Attack Power by collecting and giving them better relics. Feed your dragons to increase their level, and collect more Dragon Shards to tier them up. Research technologies for your dragons that will give your dragons more experience points when they are doing missions in those types of soil.

Hire allies from the Waritorium ally recruitment section that impart bonuses on the soil types you are planning to do business on. 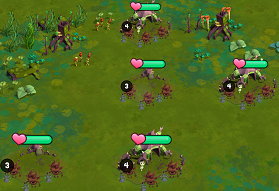 Kingdom Invader Monsters are the monsters which occupy pieces of lands in your kingdom screen, and they pose as obstacle to your kingdom’s growth. You absolutely need more free lands in your kingdom to build newer structures, and you will not be able to build a new structure unless you have a free space to build it upon. Cleaning lands of invading monsters early in the game is quite easy, but as your kingdom grows it will certainly become more and more difficult to clean more lands of the monster occupiers. It is necessary for you to be able to send out more Troops to clean them, and it is also necessary for you to upgrade your Troops having access to monster hunter type of troops, and give them power bonuses through your dragons and soil bonus through your hired allies. 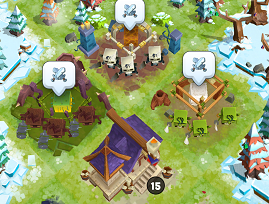