Basic information on how to explore places of interests in the realm of the mobile game Warhammer Quest 2 The End Times.

Realm explorations in Warhammer Quest II: The End Times takes part in the Empire Map of the Old World, which consists of 2 separate large regions; The Middenland region which is readily available when the game is installed on your mobile device, and The Reikland region which is available as a downloadable content; unlocked when you decide to purchase it from the game’ shop.

Explorations in those 2 regions mainly happen in 2 separate areas, in the regional area, and in the dungeons. Depending on whether you have unlocked The Reikland region or no, you might be able to choose from the Empire Map either one of those 2 regions to go into a more detailed landscape in the chosen region. Tap the desired region you want to choose and a small description of the region will be displayed, you make your choice by tapping ‘Go to Region’ button in the region description box. 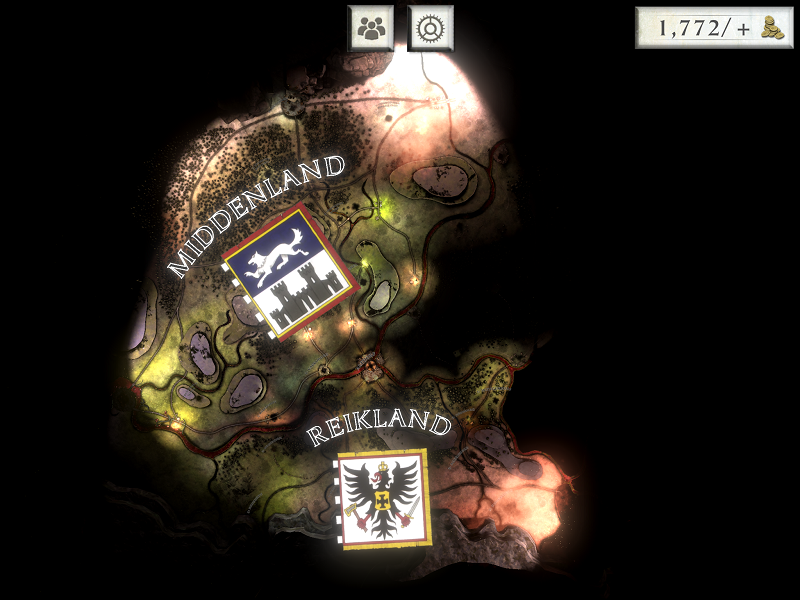 The Empire of the Old World – Middenland and Reikland

Exploration of the chosen region is very simple. The landscape is riddled with a lot of places of interests, such as cities, towns, watchtowers, villages, dungeons, etc., and potential quests markers which look like pins with glowing lights on their pinheads. Depending on whether the quests were already completed or no, the glowing lights on the pinheads still glow if they are not competed yet. Main quests areas have their pin markers coloured in red, while side quests pin markers are coloured in grey. Your current location is displayed as a spinning disk. You may zoom in or zoom out of the regional map, rotate the map or slide the map in any directions using 2 fingers; pinch to zoom in the map and pan your fingers to zoom it out, use 2 fingers to rotate the map, or use 1 finger to slide the map.

Whenever you choose any place of interests in the landscape, a small description of the chosen place will be shown, and on the place description there is a ‘Travel’ or ‘Enter’ button that you can tap to go to or to explore the chosen place of interest. In case of dungeons, it is recommended to take time to read and ponder the information provided carefully, as that might give you very useful clues as to what kind of dominant opposition forces you might encounter in the dungeon, the overall difficulty of the chosen quest, and the potential main reward should you be able to complete the dungeon exploration process. Ponder whether the reward is well worth the risks, and should you wish to proceed then arrange your 4 best heroes deemed most suitable to solve the likely obstacles and oppositions which might be encountered in that particular dungeon and equip them with suitable equipments to finish the task.

During your travel time between places of interests in any regions, your party might encounter random occurrences. Some might have beneficial or detrimental effects to your party. 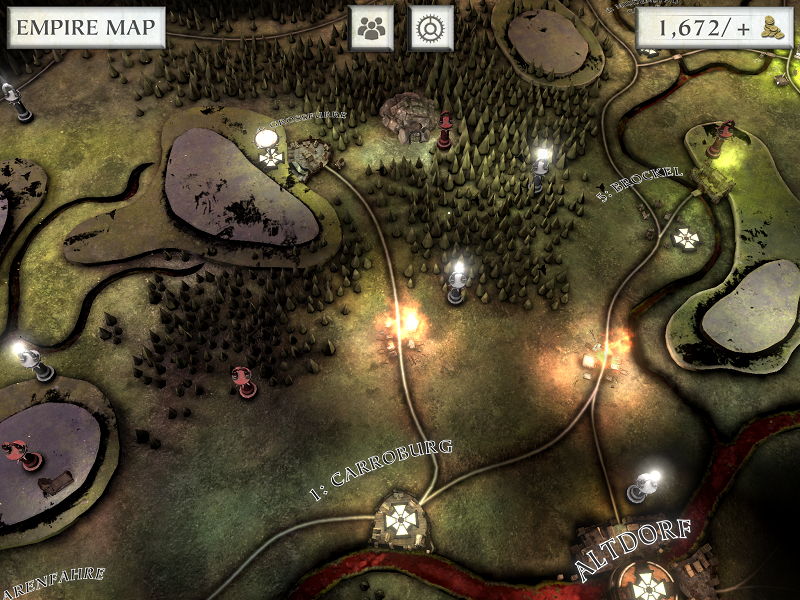 Dungeon exploration process is completely different. Dungeons always consist of room(s), depending on the size of any particular dungeon, you might encounter a 1 room dungeon or more complex dungeon consists of many rooms. If a dungeon has more than 1 room, then each room are connected with doors. Explored rooms have their doors already opened, and this might be useful should you feel lost in orientation during any dungeon exploration process.

In any dungeon exploration process, you will be taken into a screen which offers the vision of your currently chosen 4 heroes-party. You can use the same map manipulation techniques in the Region Exploration to give you better sight and better angle of vision towards any part of the current room; i.e you can rotate, zoom in and zoom out, slide the room map, too.

Aside from monsters, there are many impassable and immovable objects scattered around in every dungeon rooms, which form the shape of paths on which your heroes and the monsters may travel, and offer vision blocks for both your heroes and the monsters. Heroes and monsters which use ranged attacks whose visions are currently blocked by either the body of their own living friends or room objects cannot target and hit their intended enemies, and the same room objects may also form choke points on paths which might be either useful or detrimental for your party. It is recommended to always study the landscape of every newly entered room carefully before you make your first move, to identify those choke points then plan and make your movements and actions accordingly for each of your heroes. Some weapons and some spells can help create areas which are either immovable such as freezing ice effects or ice based spells, or have penalties to those who stepped on them, such as fire effect spells and weapons. It is a good idea to equip your heroes with these effects to create artificial obstacles/choke points for the monsters while protecting your heroes at the same time during any dungeon encounters.

Dungeon exploration always ends in 2 possible outcomes; either your party managed to clean the dungeon completely out of its evil inhabitants and managed to find the exit tiles of the dungeon by finding a square made of 2x2 tiles with white crossed circles in one of the dungeon’s rooms and placed all of your party members on top of those 4 tiles, or your entire party were defeated and knocked out completely by the monsters suffering some defeat penalties. 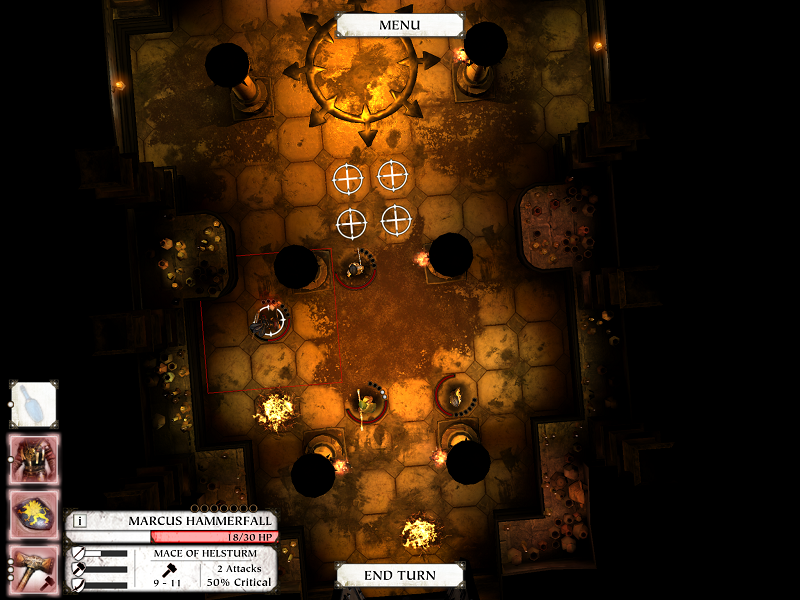 Movement in dungeons follows a turn-based rule, you always start your turn first when you enter a dungeon. Once you have spent all of your heroes’ action points or for some reasons you want to end your turn earlier, you tap the ‘End Turn’ button on the bottom of the screen, signifying that you want to pass your turn to the monsters present in the current dungeon room, if any. After the monsters finished their turn, you are going to start your turn again with all of your heroes’ action points fully replenished.

You first need to select a hero you want to move by tapping on the intended hero. When you already have selected a hero, then a series of small tiles with white circles appear around your selected hero. These tiles represent areas to where your hero may move with his/her currently available action points. Tap the location you want your hero to move into, now you will only see a series of tiles with white circles going from the location of your selected hero to the destination point you want your hero to move into, other tiles will disappear. Each white circle denotes an action point it will take your hero to move into the chosen tile. Tap again the destination tile, and your hero will move into the chosen tile. Attacking, using items, using skills, spell casting, and moving in dungeon rooms cost action points. You need to decide whenever it is best for each hero to move first, or to perform some actions first before moving; or to finish all of the action points without moving at all. Once you have your heroes performed their intended actions in your turn, remember that you may end your turn by tapping the ‘End Turn’ button on the bottom of the screen. 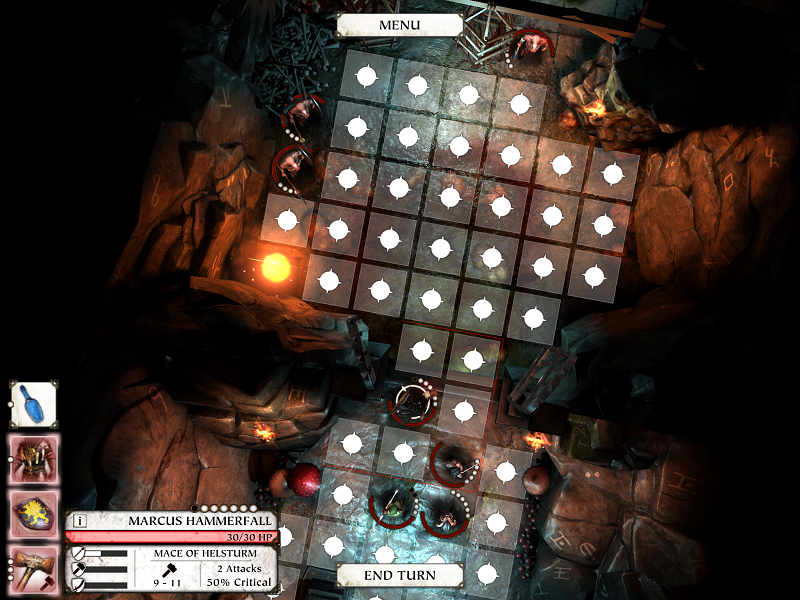 You may purposefully choose to end your turn earlier, as already mentioned above. There are some detrimental effects your heroes might experience such as poisoned/diseased or there are dangerous effects going in your heroes’ movement paths such as fire or freezing effects and usually those effects will last for several turns. It might be a good idea to postpone any active movements until those effects wear off by ending your turn(s) sooner. Alternatively, some of the effects can be wiped out using the right equipments or spells, spending necessary action points in the process. For example, diseased hero can be given cure potion, blazed heroes and blazed tiles can be doused with water bottle. 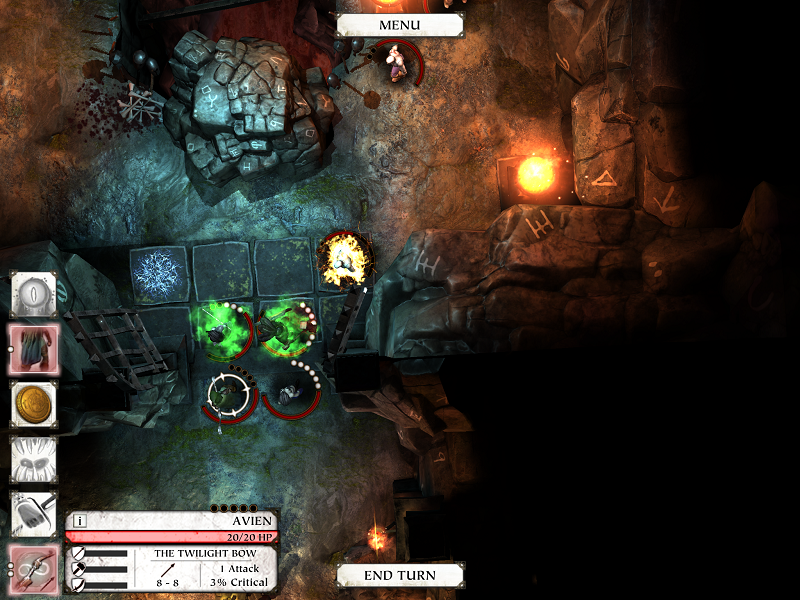