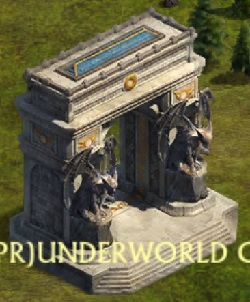 Once your alliance has built the Underworld Gates, you are eligible to participate in the Underworld Challenge Event to get great rewards for all members of the alliance. This guide explains how the event works.

How the Underworld Challenge Event Works

How to get Underworld Keys

Let's start with the beginning. In an alliance all members should be encourages to complete their Daily Rewards every day, at least up till Chest 6. Chest 2, 4, and 6 contain Red Guard Keys and these are very important, so this way everyone can get 3 Red Guard Keys each day.

Although you don't see the cooldown timer until the donations are maxed, it is already counting, so there is no need to max out the donations as soon as possible. My tip is to use the first 24 hours after the Underworld Villain is killed to let every alliance member only donate one Underworld Key. This will make sure everyone in the alliance is eligible for the Victory Rewards. Afterwards you have another day to max out the Underworld Key donations before the timer expires.

As your alliance has beaten more Underworld Villains you each time get the chance to select a stronger monster, meaning more hitpoints before it is killed. You always need to think about who is online to help, before making a decision. Sometimes it will be better to not go for the strongest, if you don't have enough members.

It is best to already take the Underworld Challenge into consideration with your hive setup and have strong rally leaders around the Underworld Gates. It is crucial your alliance is able to set and fill as many rallies as possible to do the necessary damage in the short time the Gates are open.

The big problem is the 5 minutes wait before a rally can move. So that is why it is crucial rally leaders don't lose additional time by having long marches.

As typical for these type of events in Guns of Glory, it is about doing damage, so don't go for the one perfect rally, but rather have many rallies. You don't need to worry about losing a rally. Based on experience you do much more damage with 2 rallies of 3 people, or even 3 rallies of 2 people instead of one rally of 6 people.

To do the most damage it is best to use a mix of all tiers instead of just troops of the highest tiers. This is the same for other battles against computer opponents. I tend to use a bit more of the higher tier than lower tiers, and use infantry, distance, cavalary, artillery in roughly a 1:7:7:3 ratio.

If you have people from different timezones in your alliance, it might be best to schedule the Underworld Challenge Event at different times, so everyone can participate.

Only r4/r5 can open the Undeworld Gates, but all players can set rallies.

There are two prizes. The Victory Rewards is the same for everyone that either participates in the rallies or that has donated Underworld Keys (so not all alliance members automatically receive this). The Damage Rewards are only for the ones participating in the rallies and are based on the damage ranking. The more damage you have done, the better your rewards are. You will receive these both via System Mails after the Underworld Villain has been defeated.

The prizes for both Rewards include Speed Ups, Wood, Food, Gold and Gunpowder. The Gunpowder is important for the Strategy Center.

There are no prizes for individual rallies.

The Underworld Challenge is a great way to work together as an alliance to set some rallies. Practice for the real stuff, while at the same time get some great rewards for all involved.