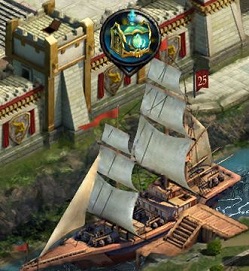 Next to the Parade Grounds outside the City Wall of your account there is a new ship and by clicking on this ship you access the interface for Merlin's Trials. Each day of the week a different trial is active that you can play. In the trials you proceed along a path and have to win battles to proceed. Your strength in these battles is determined by certain parts of your account.

These battles do not reset, which makes it different from most event and features in the game.

The battles in the trials consist of you fighting with troops against the strongholds. The troops are not based on your own troops, but are provided by Merlin. The amount of troops you can use is determined by your Stronghold level (irrespective of the trial you participate in), while the combat boosts are determined by a part of your account that is based on the trial you participate in. Details on that below in the next section.

Since these battles do not reset, you can only open the chests once.

If you get stuck during a trial, there is no quick way to proceed, instead you need to develop your account in the specific area matching the trial.

Each day of the week has a different trial based on different parts of your account (originally Sunday had the same trial as Wednesday, the Combo trial based on equipment and gemstones, but the Sunday trial was later changed to Hero). The strength (boosts) of your troops in a certain trial are determined by part of your account relevant for the trial.

During the Hero Trials on Sunday you get the boosts from your assigned Heroes.

During the Equipment Trials trials on Monday you get the boosts from your equipped equipment pieces, so make sure you are equipped for combat before you start the trials. This does not include boosts from equipped Gemstones.

During the Dragon Trials on Tuesday you only get the boosts from your assigned Attack Dragon Skills.

During the Research Trials on Thursday you only get the boosts from the completed Research in your University.

During the Gemstone Trials on Friday you only get the boosts from embedded gemstones on the equipped equipment pieces.

During the Building Trials on Saturday you get the boosts from your completed building levels and prestige levels.

Tips on the Dragon Trials

When playing the Dragon Trials it is good to keep the following in mind:

You do not only get boosts from your Dragon Skills, but also your dragon specialization. Do not forget to specialize for combat to get those Toop Attack, Health and Defense boosts, without them you won't get far.

There are certain levels, e.g. 16, the Dragon Skills have a larger increase than others. Keep this in mind and when you reach level 13 or 14 with all your Dragon Skills, make the jump to 16 one by one first, so you become stronger faster.

Consider (temporarily) resetting your guardian (gathering) and assault (monster) skills to use all your available assault and guardian points for the Dragon Trial.

Some tips on how to perfom well on the Merlin Dragon Trials and reach path 12.

Tips on the Equipment, Gemstone and Combo Trials

When playing the Equipment, Gemstone and Combo Trials it is good to keep the following in mind:

Not all boosts from your equipment have effect on the trials. Specifically Siege Attack, Health and Defense and City Army Attack, Health and Defense have no effect. For the Siege ones this is not really something you need to worry about too much, as all high level gear has some Siege boost component which is ignored. For the City Army boosts it might be something to consider when forging equipment. For example the orange Armor of Fury has a large City Army Defense boost, which is useless for the Merlin Trials. If you happen to have the Orange Dragon Plate scroll as well, it requires the same materials and you might consider forging that one instead as it has more boosts that do apply to the Merlin Trials.

For Gemstones there is nothing specific for the Merlin Trials to worry about, you just need to make sure you fill up all your available slots, preferably with Valor Attack, Health, Defense Gemstones, and preferably higher level ones. The good ones are difficult to acquire, and getting the Refining Stones to upgrade them to high level as well. This is tough for non/low spenders. Consider using the Lucky Shot for Gemstones.

In general don't think you are doing something wrong if you don't achieve as high a Trial Path on these Trials as you do on for example the Dragon Trials, as the Equipment, Gemstone and Combo trials are a lot easier for big spenders vs low/non spenders.

Some tips on how to perfom well on the Merlin Equipment, Gemstone and Combo trials.

Besides the tips above there are no easy ways to do better in the trials. You need to develop your account further in that area. Some of the trials, like building and research are more easily done by non/low spenders than others, like equipment and gemstones, as the latter are more difficult to acquire without spending money.

You can regard the trials as an extra reward for growing your account, and an indication in which area you are lacking.

Every first time you win a battle in a trial you unlock a chest that you can open to get some rewards directly, and to get Merlin's Tokens.

Merlin's Tokens can be used on the Ship (by clicking Redeem) for various rewards.

Initially I missed the ranking rewards. Once you have played a certain trial, each time after the trial was active, you can collect a ranking reward for that trial by going to the ship and clicking on the trial. These rewards expire after a week, so be sure, even if you don't play the Merlin Trials anymore, to still collect these rewards every time. These ranking rewards are also a number of Merlin Token.

So far I think it is a nice addition to the game. I am not sure how much I am going to like and use this once I have played all stages once. I like that this is not yet another feature that you are supposed to play every week or even day, because at this stage I am at times finding it hard to do all the activities you are supposed to do. For the Merlin's Trials it is fine if you don't use it for a while (just don't forget the collect the rewards) and when your account has been improved in a certain area just try it again to see wether you can get further.