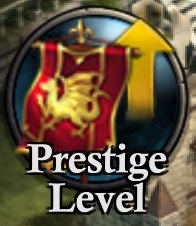 In August 2017, in the 3.5 Update, King of Avalon was extended with Prestige Levels. This guide explains how the prestige levels work.

King of Avalon Tips on Getting Prestige Banners

Explanation of the new Building Prestige Levels that was released in update 3.5. Includes tips on how to get the required Prestige Banners.

Prestige Banners can be acquired via Gathering Resources on the kingdom map, defeating Portal Monsters, defending against Fallen Knight, gathering fossils in the FIre Lands, and from specific packages.

For gathering resources I got one Prestige Banner each time I depleted a lvl 6 and 7 tile. Not sure whether you will always get one. I understand from alliance mates that lower level tiles also can give Prestige Banners, but not 100% of the time.

Update: Prestige banners can now be acquired in various other ways, including purchasing them in the Spirit Altar Store and Magic Spire Store. They are also given as reward for the Alliance Celebration in the Spirit Altar if the Wanderer Spirit is selected.

The amount of Prestige Banners to upgrade a building level increase with higher levels (although not with each level). These requirements are not the same for all buildings, for example to upgrade to prestige level 1 most buildings require 1 Prestige Banner, but some require 2 and one does not require any.

Each building has its own boosts. I have extended the details page of each building with their prestige boosts. All boosts are related to combat. The buildings to train troops have boosts that complement their troop type.

The value of the boost increases are the same for the first 5 levels and increase with 50% for level 6. I will update more information once i know more.

How to upgrade Prestige Level?

When clicking on any of the urban buildings there is a new Prestige Level menu. Via this menu you can upgrade a building to the next prestige level.

I have changed my opinion of this based on my further understanding of the combat mechanics of this game, and based on the fact that Attack, Defense, and Health boosts can now quite easily be increased via Gemstones. Because of the importance of Damage and Damage Reduction buffs I suggest to focus on the buildings that provide these first, and have less focus on the once that provice Attack, Defense, and Health.

Since the required prestige banners to increase one level increase quite fast, I suggest to do pay some focus on so-called low-hanging fruits, and for example upgrade the prestige levels of all buildings to 15 before you start to further focus on the ones that give Damage and Damage Reduction boosts only.

It is an interesting extension to have some extra boosts. I personally find it a bit of a pity that the boosts are only related to combat, it would be interesting they were more diverse like the hero boosts.

Even more so when this feature was introduced it is easy for non-spenders to get the prestige banners, so this is for sure a feature all players can benefit from.