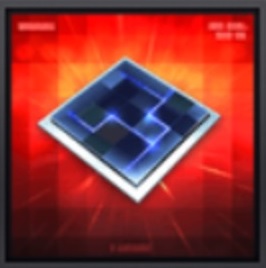 One of the recently added features in Mobile Strike are Building Boost Modifiers. It allows you to get some extra combat boosts on your buildings. I have done some initial experimenting with this, but I have to be honest, I have not figured out the logic yet (and I doubt if there is much logic behind it, there seems to be a lot of randomness).

Note: In the comments elaborate information was shared about experiments, what the maximum base boosts and multipliers are, I have updated my guide and included this information.

How Do Building Boost Modifiers Work?

The higher the level of your building the higher the XP Modifier for that building, this influences how much the Building XP Point increase when you use Building Boost Modifiers.

Bonus Rescues can be used to reset the building boosts to its previous value.

The game introduced quite some new concepts. Hopefully the screenshot and the explanation of each of the concepts below makes things more clear. 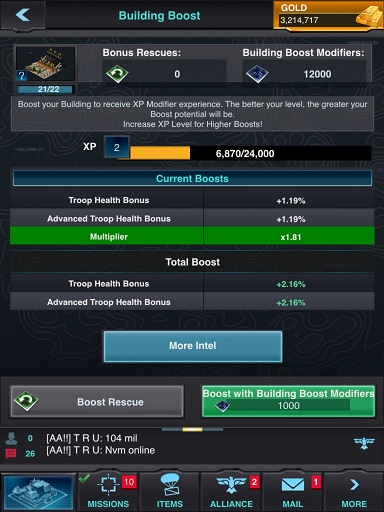 The Building Boost Modifiers are your currency for using this feature. I have not paid a lot of attention how I got them, early on it was mostly in Alliance Challenges, but I seem to have accumated quite a bit over time. They cannot be purchased in the Store though. If you win them they might be delivered to you as Crates, so look for them in the Crates section of your items. Once these Crates are used you won’t find these in your items, you only see them in the new Building Boost windows at the right top. Using these on a building will increase the building’s XP points and possibly the building XP level.

Each building has its own Minimum Building Boost Modifiers Points, you can only use points on that building in batches of that specific amount. This is 10,000 for the Headquarters, 5000 for Research Facility, War Room, Death Row and Prison, and 1000 for the other Urban Buildings.

The Building XP Levels have an influence on the Multiplier (not on the Base Boost). The points to increase levels seem to be 7200 for level 2, 24000 for level 3 and 38400 for level 4 (I have not reached higher yet). The maximum level is reported to be lvl 24, although there seems to be some bug that causes a jump from level 20 to 23, skipping levels 21 and 22. Once 23 is maxed out, the display changes to 24, and no new XP is awarded. When adding Building Boost Modifier Points to a building you will get XP points for the building, potentially taking you to the next level. It is not clear to me what other factors besides the buildings Additional Building XP modifier influence the points. I have tried it at two exactly the same buildings (level 19 Banks) and got different points 3204 and 3729, so there seems to be some random factor as well. For other level 21 buildings I experimented with I got amounts between 4200 and 5500 for each time I spent points. The 5000 I spent on the Research Facility gave me the highest amount of XP (5436), but this was just marginally higher than the XP the 1000 points I spent on other buildings got me. So there might be more of a relationship between the XP you get and the times you donate points, not the amount of points you donate.

The Multiplier is influenced by the Building XP Level, but randomness plays such a large role that on the lower levels you don't really detect an increase in value. Some experiments have pointed out that around levels 14-16 you start to have a good chance at getting multipliers around 8, while only at the highest level (23) you will have a chance at the max level of 10, while levels of 9+ becomes more likely.

The Building Boost types do not relate to the boosts you normally get from the building. Although my tests so far seemed to suggest every building has a unique combat boost (well actually three, for regular, advanced and mercenary troops) associated with it, I read somewhere else this is not the case, you can get different boosts for different buildings. See below a list of all boosts associated with the buildings as far as I have seen them. If you want to share any other boost you have for those buildings in the comment section, I will extend the list accordingly.

The Boost Recue can be used to Reset the building boosts to its previous value. As far as I know these Boost Rescues are only available in packs. Since there is a large random factor in this, you can use this if your new boost is (much) smaller than your previous one.

As you can see spending additional Building Boost Modifiers initially hardly seems to have any positive effect. Of the 6 steps after the first one, only one has a higher boost than the first one. This would seem to imply it is best to spend your Building Boost Modifier points on different buildings and once every building has some boost, spend it on the building with the lowest boost each time. This means totally focusing on trying to make the most of the randomness and mostly ignore the positive effect of an increase in Building XP Level. Once you reach higher levels the positive effect of higher levels on the Multiplier value should start to be significant compared to randomness.

In my eyes the game makers have made this way too complicated to just assign a random relateively small combat boost to a building.

See the Building Boost Modifier Data Overview for all the data I have collected so far relating to this feature.