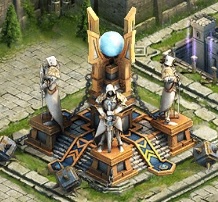 Clash of Queens has been extended with Heroes. You can add a Hero to your marches to increase specific boost types.

There are currently three different Hero Types, Ryan (with the beard), Helen (the Lady) and Leo (with the Helmet). Each Hero Type has its own specific boosts.

Ryan increases the Troop Attack when Attacking Monsters, Marching Speed, Archer Attack and specifies a number of the opponents wounded troops that will die directly after battle.

Helen increases the Gathering Speed, Attack Monster Marching Speed, a percentage of your own wounded troops that will be directly healed, and Infantry Attack.

Note: some of these are locked. For Leo the 2nd, 3rd and 4th skill boost are locked until the hero reaches level 10, 20 and 30. For the other heroes all 4 are already unlocked at low levels.

Note: there are two slots for further boosts that are not yet used.

Not all heroes of the same type are the same, their strength is determined by two characters which each can have the value D, C, B, A and S. The first one determines the base value of the skills, the second one the growth value. The order is like above, so D is the worst, S the best. When you look at the details of the Hero it will be shows in the text as lv. 1 to 5. For example a hero with value AD has a base value lv. 4 and growth value lv. 1.

In theory you would think the higher level the better, and probably that is true, but the heroes with better base and growth levels require more experience points to increase their XP level. When Training I suggest to focus on heroes with both a high base and growth levels, ideally a SS hero, but growing a AA hero will also be better than a SD hero in the long run, even though initially the SD hero will have a better boost.

In the Temple you can hire new Heroes and Train your existing Heroes.

In the right Hero menu you can recruit new heroes. One free hero each day, afterwards you pay incremental gold cost.

In the left Hero menu you can manage your Heroes. An important aspect is training them. You can train three heroes at a time and this gives experience points and has a cooldown timer. There is an Upgrade button, back I have not yet had the necessary Experience to use this. You can Dismiss heroes, which is useful as too many heroes will make things confusing. There is an Add Star button. Currently my Helens already have some Stars, but I did not explicitly assign them, not sure how that works either.

It all gets quite complicated, and if I find some time I will work on making some overviews of the data related to the heroes, which should hopefully make things more clear, I want to share two things that are in my eyes a bit counterintuitive and that you should pay attention to.

The game will always suggest the highest level Hero for your marches irrespective of what you are doing. It is best to pay attention to what your march is going to do. For hitting monsters I select Ryan for the increased Troop Attack against monsters and Archers Attack. For gathering I select Helen for the Gathering Speed boost. My Leo’s are lower level, for sure once I get them to a higher level they will be best for combat, for now I opt for Ryan he gives better boost (I have been a bit unlucky with my Leo draws, have two double Ds).

It gives a nice extra dimension, but since the feature is quite complex and the game is not very smart when it comes to suggesting which hero to add to a march (based on the activity of your march gather/monster/combat, and looks at highest XP level instead of highest boost) it is quite cumbersome to make the most of this.

Contributed by: GamesGuide on October 5, 2016