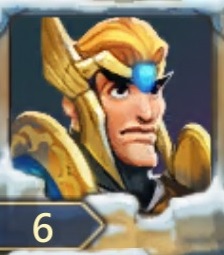 Lords Mobile has an elaborate system of heroes, that can benefit your game play in various way. This guide explains the hero system.

Explanation of the Hero System in Lords Mobile, including Hero Battle Skills, how to unlock, upgrade XP Level, improve Grade and Rank. How to play the Hero Game, collect trophies and medals, and considerations which Heroes to include in your Army.

All free to play heroes can be unlocked in the hero game that can be accessed via the Golden Statue in your Turf.

Each 3rd stage (so stages 3, 6, 9, 12, 15 and 18) of a chapter can be replayed and once you have completed it without losing any Hero, it will have three crowns above it, and you can sweep through it.

Sweeping through stages is a great way to get the corresponding medals, trophies and/or XP items. When clicking on a stage you select the blue or red button on the right to Sweep through it once or many times.

There is a limit on the number of Elite Stage Entries you can do, specified by your VIP Level (daily Elite Stage Entries). Note that there is also a limit to the number of daily Braveheart uses specified by your VIP level. This is a bit confusing, it does not actually allow you to recharge your Stamina for free, but it specifies the maximum of times you can recharge your Stamina in one day. You still need to pay for recharging your Stamina.

Heroes are unlocked in the hero game by acquiring medals. For each hero there are specific stages where you can acquire the medals that are necessary to unlock them. You can find the heroes you still need to unlock in the Heroes menu (the Helmet in the menu bar) in the second tab with the question mark. By selecting a hero you see the stages the medals drop. You need 10 medals to unlock a hero.

Upgrading the XP Level of a Hero

Upgrading the XP Level of a Hero is relatively easy. You can get XP by letting the Hero be part of a team that you use for battle, including in the Hero Game, or you can feed it the XP items you acquire via sweeping through stages of the Hero game. These items can be added via the EXP button at the bottom of the overview of your available Heroes.

Upgrading your heroes will increase their Attributes and improve the effect of Hero Skills. There are also minimum XP level requirements for being able to assign certain trophies, necessary to upgrade the Hero's rank.

You cannot upgrade your Hero XP Level past the player XP level.

Increasing the Rank of your Heroes

You can increase a Hero's rank once you have assigned a trophy to each of the six available trophy slots. These trophies are acquired in the Hero Game. You can click on a Trophy slot, followed by clicking the How to Get button to get an overview of the stages where you can acquire the Trophy. Some Trophies are not acquired directly, but can be fused from other trophies, in such cases you can click through to see where to acquire the necessary component trophies.

Increasing the Rank to 4 and 7 unlocks new Battle Skills and Hero Skills.

Increasing the Grade of your Heroes

You can increase a Hero's Grade by collecting medals. There are 5 Grades symbolized by colors: Grey, Green, Blue, Purple, Yellow. To unlock a Hero you need 10 medals, to change the grade to Green you need 20 medals, Blue requires 50 Medals, Purple requires 100 medals and Yellow/Gold requires 500 medals.

When selecting one of the heroes you have already unlocked, you can click on the button with the arrow in the hand under the Medals section to see in which stages you can acquire the medals. This is very helpful to focus your efforts to upgrade the ranks of specific heroes.

Increasing the Grade is not easy, but it is very important as it greatly increases the effect of Battle Skills.

As you have unlocked more heroes you get more choices when it comes to which hero to make your leader and which heroes to equip in your team for the Hero Game and for battles.

Note that your Castle level determines how many heroes you can have in your Army, at lvl 17 you reach the maximum of 5.

You need to make sure your Hero Battle Skills complement your troops, i.e. if you attack with all Cavalry, you should have Heroes in your Army that provide Cavalry boosts.

It seems to be of no direct effect which Hero you select as your leader with respect to combat.

For Ecomic or Development boosts your Hero needs to be the leader for the "Battle Skills" boosts to be active.

Most similar games do not have this elaborate Hero feature, this gives the game a nice extra dimension. Both combat and non-combat boosts can be significant, and it becomes very relevant It gives a nice extra dimension, but since the feature is quite complex and the game is not very smart when it comes to suggesting which hero to add to a march (based on the activity of your march gather/monster/combat, and looks at highest XP level instead of highest boost) it is quite difficult to make the most of this.