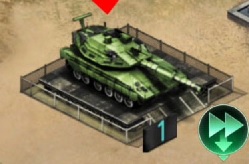 Mobile Strike has been extended with a Single Player game, Mobile Ops. By playing this game you can acquire huge boosts.

Explanation of the new Mobile Ops game inside Mobile Strike.

There is a new Mobile Ops building next to the Speed Up Factory and Monument inside the city Walls. Inside this building you can access the Tank Zone, which contains a game similar to the Explorer Dungeon in Game of War.

The main goal in the game is to acquire credits, but there are also other prizes that help with playing Mobile Ops. The Mobile Ops Credits can subsequently be used to assign in the Stat Shop to acquire boosts.

Before entering one of the levels of the Game via the Enter buttons you can assign a weapon via the Switch button and you can increase your available moves (be aware, you can not increase above your max moves).

Once you Enter the Game you get into a 4x4 maze. As you move around you will see a small map of the maze at the right top of the view with a Blue indicator specifying where you are. Above that you see how many caches and enemy tanks are still in this level of the maze. At the bottom you see two bars with Repair Kits and Munitions. Shooting costs you munitions and being hit will diminish your Repair Kits. Both of these can be replenished via the buttons right above the bars, if you have the necessary items. Finally to the right of these bars is your Loot.

In each 'Room' you will see arrow where you can move. Making any move, whether to a new room or an already explored room will cost you a move.

When you encounter a tank you have the option to use your special weapon via the button on the right, or just your regular weapon. The special weapons costs you Munition, but will kill the enemy tank faster.

Possible Loot I have encountered are Mobile Ops Credits, Munitions, Research Files and Mobile Ops Restricted Files. Each item you pick up occupies once slot. It happened to me I had two 50 Mobile Op Credit Items taking each up one space, which did not leave any more slots for a 1000 Mobile Ops Credits Item I won by killing the level 1 boss. If such situations occur you can simply discard one of the unwanted items in the inventory and afterwards pick up the more valuable item.

Each maze contains a Mission Objective protected by a Boss Tank. Once you have encountered and killed the Boss Tank and move to the next room you reach the Mission Objective where you can Exit. If you decide to continue (I did not have that option, possibly because I hadn't done necessary research, not sure), you risk losing your loot if you run out of moves. So only do that if you have plenty of moves left and are confident you can also complete the next stage.

Once you have completed a Level a next Level shows up in the list of possible Levels.

After playing the game the Moves will refresh with a cooldown timer.

Looking at the system I notice that everything except for the first 10 levels of Infantry Defense with Commander needs to be unlocked with research.

There are a total of 51 research projects in the Mobile Ops research category. Each belong to one subcategory.

There are 5 projects that unlock and increase the damage of weapons.

There are a total of 14 projects that unlock categories and levels in the Stat Shop.

The remaining 32 projects improve all kind of aspects from the Mobile Ops games, influecing such things as your moves, how many items you can carry, and how much damage you do.

My first impression of this feature is that that it is quite well set up. The benefits you can acquire via this game are huge. Although I realize you likely cannot acquire much without paying, it is nice to see this feature is not totally unavailable for non-spenders, even without paying anything you can play the game and even win some Mobile Ops Restricted Files allowing you to do some research.