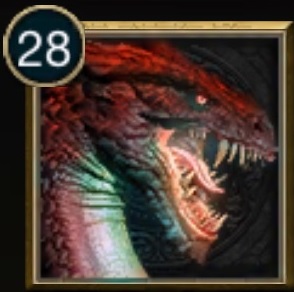 You have Dragons that can help you both defend your castle and accompany your troops on attacks. This guide contains information relevant for developing and using your dragons.

Initially you have a Red (or Fire) Dragon. In addition there is an egg that can be hatched which will result in a Blue Dragon.

Both for Attack and Defense your Dragon needs to have had sufficient food. When you join the Dragon in your attack and it has not had enough food, you will get a notification and will not be able to join the Dragon.

By selecting the Dragon nest in your castle and clicking Feed you have the option to feed your Dragon which will restore its energy. There are 4 feed buttons, each have an increasing food cost and restore an increasing amount of energy (the bottom of the two vertical bars). When you click the smallest amount there is a chance the next one will become active and so on. Not sure why it is setup this way, but if you are unlucky you might have to click the smallest amount many times to restore a significant amount of energy.

You can make the Dragon more powerful by feeding it Elementals (Fire Shards, Crystals, Essence and Soul) via clicking the Element item when selecting the Dragon nest. You get the red Elementals from hitting monsters, doing daily quests and they come with some special events. Just feed the Dragon all elements that you have, you will see the attack and defend stats go up slowly.

The Blue Dragon egg requires Ice Spirits to hatch. So far I only found out I can acquire them by doing all Daily Quests (this will get you two). You can add them to the Egg by going to the Dragon, clicking Feed, and using the arrow button at the right bottom of the Dragon (this switches between the Dragons). You will need 1000 of these Ice Spirits to hatch the Egg, so if it keeps going at a rate of 2 per day, it will take some time…

Leveling Up the Dragon

Joining the Dragon in Attack and Defense

When Attacking you can let the Dragon join by simply clicking on the Dragon checkbox at the top (below your Lord and above the Troop categories).

When I started playing after each time I used my Dragon in an attack I had to explicitly order it to go into defense mode. Now it seems that happens automatically, not really sure whether this is something that changed in the game, or whether it is because I am at a higher level now.

In the Battle Reports you see the Dragon as a special troop unit types and you can see the number of kills the Dragon has caused.

Dragons can be a useful addition in both Attack and Defense, it is easy to level up and you get quite some Elements during your normal gameplay, so it is just a missed opportunity, causing you extra lost troops in attack and defend, if you do not use Dragons. If you have any questions or other information relating to the Dragon, please share in comment section below.

Contributed by: GamesGuide on August 5, 2016