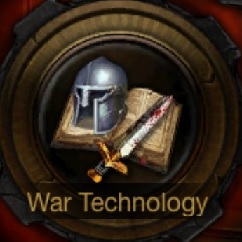 Each group contains a separate project for each of the troop types (infantry, cavalry, caster and shooter).

The regular resource requirements for the first set of projects are very low, but there is a catch, you need the special ingredient Honor to research the projects.

This Honor is not so easy to come by. Initially when it was introduced on September 20 you got it from slaying monsters and killing troops. Unfortunately for me this was during a period I was very busy with non-game related stuff, so I missed the great opportunity, some of my alliance mates got huge amount of Honor during the first week.

One week later an update was announced, you could no longer get Honor for killing monsters or Koschei during normal days, only during a new time limited Monster Post Reward event. I have not seen this event come by yet, not sure whether I missed it or it hasn’t been introduced yet.

In addition there has been a daily upper limit (related to the level of your castle) on the amount of Honor you can earn, which will also make it impossible to earn huge amounts of Honor by just going all out during one day of a kill event. I am not sure what these daily upper limits are.

This is a useful addition to the Research Categories to lower the resource cost for training troops. Catch is that you need the new currency in the game, Honor, but so far this seems to me to be the best way to spend the Honor you might have accumulated. (note: you could also use honor to purchase VIP points and special items in the Hall of War Honor Store).

Contributed by: GamesGuide on October 6, 2016