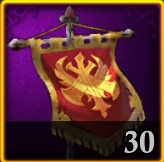 In December 2017, in the 1.3 Update, Guns of Glory was extended with Glory Levels. This guide explains how the glory levels work.

Explanations of Glory levels with tips on how to get Glory Banners and how to best use them.

Initially the Glory Banners could only be acquired via buying certain packs, but shortly after other ways were introduced.

Glory Banners can be acquired via Gathering Resources on the kingdom map, defeating Underworld Gate Villains, defending against Red Guard Raids, and of course still from specific packages.

For gathering resources I typically get one Glory Banner each time I deplete a higher level tile (although this does not always happen). Gathering in an alliance resource building will got provvide any glory banner.

For the Underworld Gates, you can get both Glory Banners for victory and damage rewards. I don't know details yet.

For Red Guard I got 108 Glory Banners from the standard rewards, this amount depends on your individual points as well as the points of your alliance.

Glory levels can only be upgraded once a building reaches level 15 and the maximum glory level is the same as the maximum level of the building. Only the urban buildings have glory levels.

The amount of Glory Banners to upgrade a building level increase with higher levels (although not with each level). These requirements are not the same for all buildings, for example to upgrade to glory level 1 most buildings require 1 Glory Banner, but some require 2 and one does not require any.

Each building has its own boosts. I will extend the details page of each building with their glory boosts. All boosts are related to combat. The buildings to train troops have boosts that complement their troop type.

The value of the boost increases are the same for the first 5 levels and increase with 50% for level 6. This jump in the increase happens each 5 levels.

How to upgrade Glory Level?

When clicking on any of the urban buildings there is a new Glory Level menu. Via this menu you can upgrade a building to the next glory level.

I have changed my opinion of this based on my further understanding of the combat mechanics of this game, and based on the fact that Attack, Defense, and Health boosts can now quite easily be increased via Gemstones. Because of the importance of Damage and Damage Reduction buffs I suggest to focus on the buildings that provide these first, and have less focus on the once that provice Attack, Defense, and Health.

Since the required glory banners to increase one level increase quite fast, I suggest to do pay some focus on so-called low-hanging fruits, and for example upgrade the glory levels of all buildings to 15 before you start to further focus on the ones that give Damage and Damage Reduction boosts only.

It is an interesting extension to get some extra boosts. The boosts can make a real difference. All combat boosts are useful, but especially the Dmaage and Damage Received Reduction boosts are hard to come by in other ways and can have huge influence in combat.

For non/low spenders it should still be easy to get at least some benefit from this feature.

I personally find it a bit of a pity that the boosts are only related to combat, it would be interesting they were more diverse like the guard boosts.