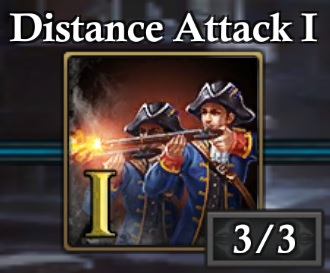 This article gives an explanation of how maximize your Distance Attack boost in Guns of Glory. The focus is on Distance Attack, but for most categories Defense and Health are acquired in the same manner.

Explanation of all the different ways to increase your Distance Attack boosts.

We will have a look at each category in which you can get Distance Attack boosts and explain how you can acquire these.

The Master set gives 190% Bowmen Attack boost, this might be increased further by complete set and/or enhancements, but I have no data on those.

I don't have complete data for this, so far only until lvl 31, at which level the Shooting Range gives 78.7%, and Trade Station and Lookout Tower each 2.22%.

Extrapolating this data based on the assumption that the increments for each level above 31 will be the same as the increment from lvl 30 to 31, I estimate a total glory level Distance Attack boost of 96.52% for the Shooting Range and of 11.1% for the Trade Station and Lookout Tower each. So a total of 118.72%

After Catacombs v2 was introduced the benefits of some of the Creation Skills were changed as well, there is now a Distance Attack I (5%) and Distance Attack II (30%) that give a combined benefit of 35%.

You can get a total of 250% Distance Attack boost with Mademoiselle Maupin, Thomas Blood, D'Artagnan and Kitty.

See in table below a breakdown of the above discussed ways to get Distance Attack bonus.

There are some very specific boosts, such as the boosts you can select inside the Magic Spire, or the boosts you can get when plundering full or defending empty alliance buildings in the ultimate alliance conquest that are not included in this overview, but that can cause higher Troop Boosts to show in in battle reports.

This should give an idea how some players (big spenders) get these 1000+% Distance Attack boost, while you are stuck between 200% and 800%.

Although this Distance Attack boost is great, do not forget to focus on damage and damage reduction/received as well.