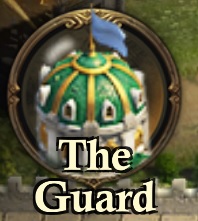 Guns of Glory has a The Guard building that you can use to assign guards to get boosts in various areas. This guides describes this new functionality.

Explanation of Guards in Guns of Glory, including analysis of the benefits of the guards in each of the 8 positions.

There is a The Guard building, in between the Drill Grounds and the Bank, which is unlocked when your castle reaches level 10. In this building you can recruit Guards and assign Guards to one of the 8 available positions. Once a Guard is assigned to a position you will get its boosts. The boosts can be increased by leveling up your Guards, and more boosts can be unlocked by increasing the stars of your guards.

There are 8 positions, and a Guard can only be assigned to a position that matches its type. These positions/types are Captain, Weapon Master, Master of Defense, Strategist, Advisor, Ambassador, Innovator, Aide.

The type of boosts a Guard provides are related to the type, although guards of the same type do not provide exactly the same boosts.

There is one Guard of each grade for each position at this moment, but the number if guards might be extended later.

There are three Grades of Guards: Regular (Green), Rare (Blue) and Epic (Purple). The Regular Guards have 3 Stars or Prowess, the Rare 4 and the Epic 5. Unlocking these extra Stars gives extra boosts.

The boosts of the first star or basic boost increases with the XP level of the guard, but the other boosts unlocked by higher Stars have a fixed value.

When going to The Guard building, the Recruitment Hall is the menu item to recruit new guards. When you access this you have the option to Summon a Guard via the Apprentice, Advanced and Master menu.

Via the Apprentice menu you can recruit a Guard each 8 hours for free, or pay gold (first attempt 200). Note that when recruiting you do not necessarily receive a guard, you can also get Guard XP or Guard Fragments. It is possible to get a Rare Guard with an Apprentice Recruitment, but not an Epic Guard.

Via the Advanced menu you can recruit a Guard each 24 hours for free, or pay gold (first attempt 1000). Also here you can receive Guard Fragments or Guard XP instead of a Guard. You have a larger chance to get a Rare Guard than with an Apprentice Recruitment.

Via the Recruitment Hall you can access the Guard Gallery, which gives you an overview of all guards available in the game.

When going to the Guard building, the Guard Roster is the menu item to upgrade your guards.

You can select a Guard and use the Green Plus button to assign Guard XP. Guard XP can be acquired via Recruitments and killing Beasts, as well as the occassional Doc Gift and as prize of some Events. An increase in the XP level increases the value of the primary boost.

In the Guard menu of the Guard Building you can assign guards to positions. The positions are unlocked by castle levels 10 to 13. You can Assign and Dismiss Guards, making it possible to easily switch between two guards of the same type. Only the assigned guards will provide boosts for you.

In the left plane you see the total boosts all assigned guards provide for you.

With respect to assigning Guard EXP, one should keep in mind that so far there does not seem to be a way to get Guard EXP back once assigned. So, before you start assigning loads of points you might consider your ultimate goal. If you are a big spender you might just wait until you got the best purple guards and only assign on those. However if you are a small/non-spender your Guard XP might be better spend on green guards first. In my experience some of those 3 Star Green Guards are not bad at all, and although currently even green guard fragments are not easy to come by, this might change later in the game and it might be worthwhile to think ahead. Upgrading blue or purple guards to multiple stars might remain to be tough, so as a low spender you could consider upgrading all green guards to XP level 20, so you can upgrade them to 3 Stars once you acquire the fragments.

Unless you spend a lot you are not going to be able to max out a guard for all council positions, so also keep in mind what boosts are most important for your game play.

Why Green Guards are Good

For each position a green guard upgraded to 3 Stars has interesting benefits, often much better than blue or purple at 2 Stars. Here is why you should go green, and when you should upgrade to blue or purple.

Captain: Maurice of Orange gives a nice Cavalry Health, Distance Health and Infantry Defense Boost. The Blue and Purple guards in this category only become significantly more favourable at 4 Stars, when they introduce Troop Defense and Health boosts.

Weapons Master: Lady Silver is great at 3 Stars, giving a Troop Attack boost next to the Distance Attack and Damage boosts. The blue guard does not provide any general troop boost at all, so I would skip him in this position. The purple one is better if you can upgrade them to three Stars.

Master of Defense: Madame Brutal gives a nice Ctiy Army Defense boost, but I am not impressed with the trap related 2nd and 3rd Star boosts. The blue Executioner of Lille is not much better, the purple Colonel Essarts is preferred, even with only one Star.

Strategist: I am not too impressed with the Trap Construction Capacity and Hospital Capacity boost Lord Winter gives for 1 and 2 Stars, but the Reinforcement Capacity boost for 3 Stars can be nice. The Blue Madame Lannoy gives a Training Capacity boost as 1st Star boost, which is wortwhile to spend XP on if you do not have many Military Tents. The 2nd and 3rd Star Trap related boosts are of no interest to me, and the 4th Star March Capacity boost is interesting, but for non/low spenders impossible to reach. The purple Jules Mazarin gives 1st Star Reinforcement Capacity boost and 2nd Star Training Capacity, but these are easily to achieve with the Green and Blue Guards. Only when you upgrade him to 4 (March Capacity) and 5 (Rally Capacity) Stars does it really become an added benefit.

Advisor: Madame Chevreuse provides Wood Production and Wood and Food Gathering boosts. Once you have these they are useful to use during the gathering stage of the gold event, but for the rest you likely mostly gather silver and iron. I found it a waste to spend EXP on both the blue Thomas Hobbes and the purple Rene Descarters, as I can only use one at a time. I much prefer the silver production boost of Rene Descartes, this is another situation where it is worthwhile to assign EXP to different Guards for the same position and switch based on activity.

Ambassador: Chancellor Seguier has a 2 Star (Trading Capacity) and 3 Star (Troop Load) boost that are very useful in specific situations (transferring lots of resources to an alliance mate, or harvesting large amount of resources from a zeroed enemy or farm). I don't add much value to the Troop Upkeep boost from the blue Count of Wardes (too little difference), but the 2 Star Resource Production would be nice to have. The 4 Star Resource Gathering as well, but that is out of my reach. The purple Constance provides a 1 Star Resource Gathering Speed boost. The higher Star boosts are actually also interesting with Guardian/Assault power usage reduction and resource production. For this position it is worthwhile even for a non spender to spend on at least two guards (green to 3 Stars and blue to 2 Stars or purple just assign EXP to increase the resource gathering speed. Assigning to both purple and blue might not be useful, as you either want to focus on having your resource production or your resource gathering boost up, you can't have both active).

Innovator: Blaise Pascal is especially nice for the 3 Star Construction Speed boost, and if you have lots of healing to do the healing speed boost will help as well. The blue Dr. Van Der Beek gives a very useful Lord Stamina Recovery 2 Star boost, so I would do the necessary to get enough fragments to upgrade it to two stars and have this one active. If you are not a big spender it is probably best to just assign more EXP to Dr. Van Der Beek and forget about the purple Galileo Galilei, but if you do spend lots of money and you can get him to 5 Stars you benefit from a nice Troop Training Speed boost.

Aide: John Felton is a great at 3 Stars and if you are a low/non spender, do not spend any EXP on other guards in this category. The blue Mousqueton only becomes interesting at 4 Stars with a Construction Iron Requirement reduction, while the purple Planchet only at 3 Stars starts to favor John Felton.

This Guard feature can provide large boosts, and there are a large varierty of interesting boosts such as various Combat Boosts, Research and Construction Speed Increase, and resource cost reduction boosts for both construction and research.

For low/non spenders it is still easily possible to get most (green and blue) guards and guard experience. Getting enough fragments to unlock other stars is harder, especially for the blue and purple guards.