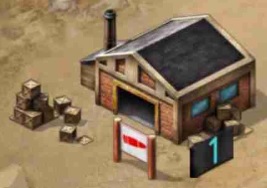 Mobile Strike has been extended with another building, the Arsenal, which can provide large attack boosts for attacking deployments and rallies.

What do we know so far?

The Arsenal is located to the far left side of your base, next to the Mobile Ops building and Speed Up factory.

It needs to be unlocked by an Arsenal BLUEPRINT and requires Assembly Bots to upgrade. As usual with new buildings, these required items only come in packs.

Once unlocked you can activate Ammunition in your Arsenal, which will provide extra boosts for attacking Deployments and Rallies.

The available Ammunitions and the amount of the boosts depend on the level of your Arsenal.

Once you reach Arsenal Lvl 21 you can activate 2 Ammunitions at the same time.

Boosts only apply to attacks against enemy bases.

You need one Arsenal Bullet for each troop in your Deployment or Rally for the boost to apply. If you have two Ammunitions active when your Arsenal has reached Lvl 21, you will need two Arsenal Bullets per troop.

You can also deactivate boosts again, to conserve your Arsenal Bullets in case you are doing attacks where you do not need them.

This should give a basic idea, if you have questions or more information, please share in the comments.