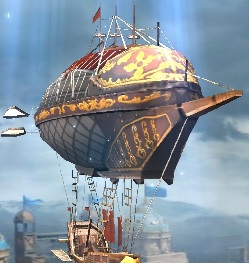 The Airship can provide many boosts via the Airship Abilities. In this guide we will explain how to develop your Airship and how to benefit from a strong Airship.

Explanation of the Airship in Guns of Glory, including Airship Abilities, how to Assign, Upgrade and Enhance them, how to level up your Airship.

There are four categories, Attack, Defense, Gathering and Beast, for which you can Assign Airship Abilities. Airship Abilities Assigned to a certain category will only benefit when your Airship is used for that activity.

Note that some of the Airship Abilities can be assigned to more than one category. E.g. Cloud Storage (increasing the resources your troops can carry), can be used both for the Attack and Gathering category.

Leveling Up Your Airship

You get Airship EXP via most normal playing activities, but in case this is not going fast enough, there are various ways to buy Airship EXP with in game credits.

Your Airship can be upgraded until level 70, which takes a total of 961 million Airship EXP.

When you select one of the Airship Abilities you will open a detail window showing information about the current rank and what is required to upgrade. The requirements are an Airship Level and either Guardian or Assault points (based on the type of Airship Abilities). The required points increase for each Airship Ability Level, while upgrading your Airship Dock gives a reduction in the points cost. The rewards for the upgrade are an increase in power and an improvement in the boost. If you meet the requirements you can upgrade the Airship Ability by clicking the Upgrade button in the detail window.

Assault and Guardian Points are relatively easy to come by, you get them with your standard activities like gathering resources (Guardian Points) and Attacking Beasts (Assault Points).

Assault and Guardian points can be purchased in game, some good ways are the Mining Loot, Hall of Heroes and Royal Expeditions shops.

In the Related link below you can find a complete list of the stats for all Airship Abilities.

Airship Abilities can be upgraded until level 31. Note that the increase in boost is not always the same, for example the Damage boosts have an extra large increase from level 5 to 6, 10, to 11, 15 to 16 and 20 to 21. Also note that the Airship Abilities giving damage boosts give a different type of boost from level 22 onwards (the boosts that was incremented until lvl 21 will no longer be increased).

If you are no longer using a Airship Ability you have used you can use the Reset button to reset it and get the Intensity Gears back, but this costs an Airship Ability Enhancement Reset item.

I am not sure how high you can theoretically enhance your Airship Abilities, but the added benefit of another level of enhancement tends to be quite small compared to the extra cost. Most big players I encounter do not have higher enhancement than 6 Star, potentially increased with +1 by a Wonder.

A typical used setup for both Defense and Attack if 8 slots are available is March of Fury, Distance Devastation II and III, Cavalry Cannons I and III, Infantry Cover I and II and Survivor Seeker.

For defending your own city Survivor Seeker (Battlefield Treatment) and March of Fury are not necessary. If you have higher level Airship Abilities you could still consider using the Distance Devastation I, Cavalry Cannons II and Infantry Cover III for the level 22+ boosts they give, which also holds for Survivor Seeker.

For defending during e.g. KvK it is still useful to have March of Fury and Survivor Seeker as your defensive Airship Abilities as well.

If you use this setup and max all Airship Abilities to lvl 31 and enhance them to 6 stars you will get the boosts as in table below:

The boosts will only apply if you use your Airship for the activity. So if you have equipped abilities to improve your gathering speed, these only benefit the march the Airship joins. If your base is attacked and your Airship is out on a march, your base will not benefit from the Airship defense boosts.

The amount of the boost you can get from switching your Airship Class depends on the EXP level of your Airship.

Resetting your Airship for Specific Tasks

I am still quite far from unlocking these, so I have no additional information. If anyone happens to know more about them, any information is welcome.

Later on in the game Airship Parts were introduced, which can be attached to the Airship Ability slots and give extra combat boosts. See below in the related links a link to a guide describing the Airship Parts.

The Airship is a nice concept in Guns of Glory. Initially it might be somewhat misunderstood or undervalued because of the unfamiliar boosts (e.g. Distance Damage Against Cavalry), but these boosts are powerful and can be increased to quite high values.