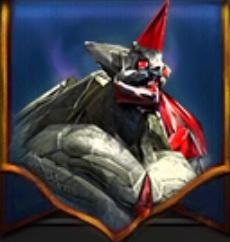 King of Avalon was extended with the Kingdom Threat event in update 3.4. This guide explains how the event works.

Explanation of the Kingdom Threat event. Focus on best troop configuration to do most damage.

How the Kingdom Threat Event Works

Each week on Saturday there will a giant Golem summoned in the kingdom. All players in the kingdom should work together to kill the golem.

Each time you hit the golem, you do a certain amount of damage and based on this damage you get damage rewards. At the end of the 24h period it is determined whether enough damage was done to kill the Golem and everyone will be updated by e-mail.

The attacks are done by solo attack (not rally), and there is a maximum of 10 hits for each player.

From the Event Center you can start an attack on the Golem, and here you can also find the information about your position in the damage ranking.

Strategy for doing Most Damage

I have not done a lot of testing on this, so if others can share thoughts and experience it is much appreciated.

I have used a mix of all available tiers and troop types. I do only not use the Towers and Rams Siege troops (do use the Distance Siege), because they are very slow and incremental damage is low. I have mostly Bowmen and Cavalry, roughly the same, and more of the higher tiers. 1000 Infantry of each type, and 5000 Tier 9 siege and lower amounts for the lower tier distance siege.

I have not boosted my march size, but understand the higher the march size the more damage,

Also understand the use of Attack boosts can help.

For Dragon Skills I have my Bowmen and Cavalry Rage to lvl 13 and Siege Rage to lvl 11. I have noticed these have a positive effect, and understand some players reassign all their assault points to these Dragon Skills before participating in the Kingdom Threat Event.

I currently do roughly 140k damage per hit (which ranks me normally just outside top 20). I plan to do some experiments to maximize this, which I haven't done so far.

There are three different ways to get rewards from this event.

If the monster is defeated you get an extra reward of 5 Noble Keys.

If the monster is defeated there will be a special auction in the Auction House. The proceedings of this auction will be distributed amongst the players who have done most damage. It is not clear which rank you need to achieve to get gold. Normally I get few hundreds of gold.

It is a nice extra event and to some extend stimulates some collaboration between players in the kingdom. Lord EXP rewards are quite high.