Explanation of the Combat Mechanics in Guns of Glory. Focus on Attack, Defense, Health vs Damage and Damage Reduction and overview of how to increase Damage related buffs.

The focus of this article is to explain about Attack, Defense, Health, Damage and Damage Received/Reduction, and for simplicity sake we leave out the complexity of different troop types and troop subtypes. As a basis we use a quite extreme battle report where a very strong player attacks a large amount of troops of a strong player and only loses a few troops. Note that the report I use is from King of Avalon because I currently don't have a suitable report from Guns of Glory to illustrate this, but the combat mechanics are the same. 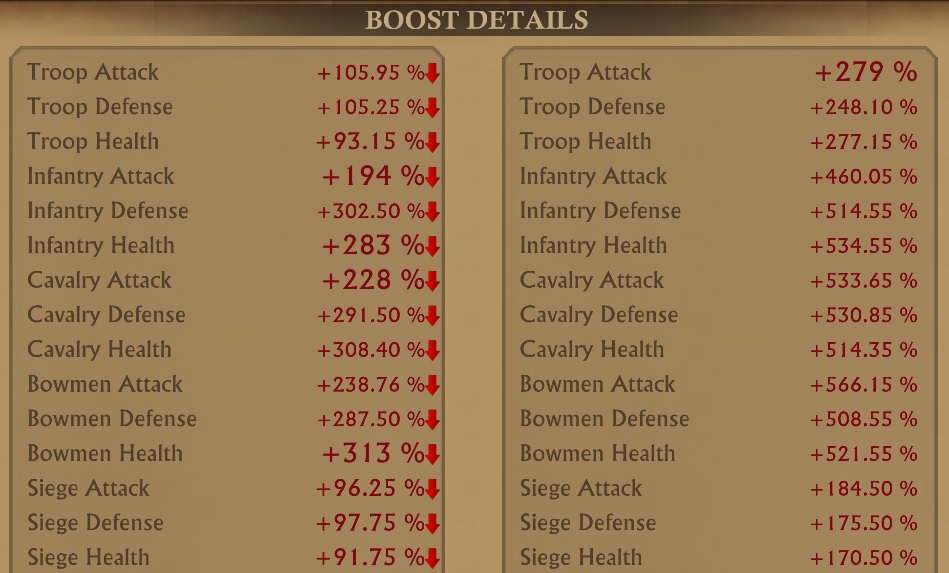 Attack, Defense and Health are the basic stats each troop type has that are relevant for combat and they can be improved in many different ways.

In a battle the difference between attack of one player and defense of another player determines the damage that is done and together with the health of your troops the damage done determines how many troops die.

The exact formulas have not been published by the game makers and you will find that even when total defense of one player is higher than total attack of another player some small losses will be taken.

When looking at Attack, Defense and Health a lack in stats and buffs can be compensated by larger amount of troops, basically no matter how large the difference in boost is, you can theoretically compensate it by large amount of troops.

Because of this, the above shown losses (or lack of losses) could never have occurred based on the attack, defense and health alone, but that is where damage and damage reduction/received come into play. 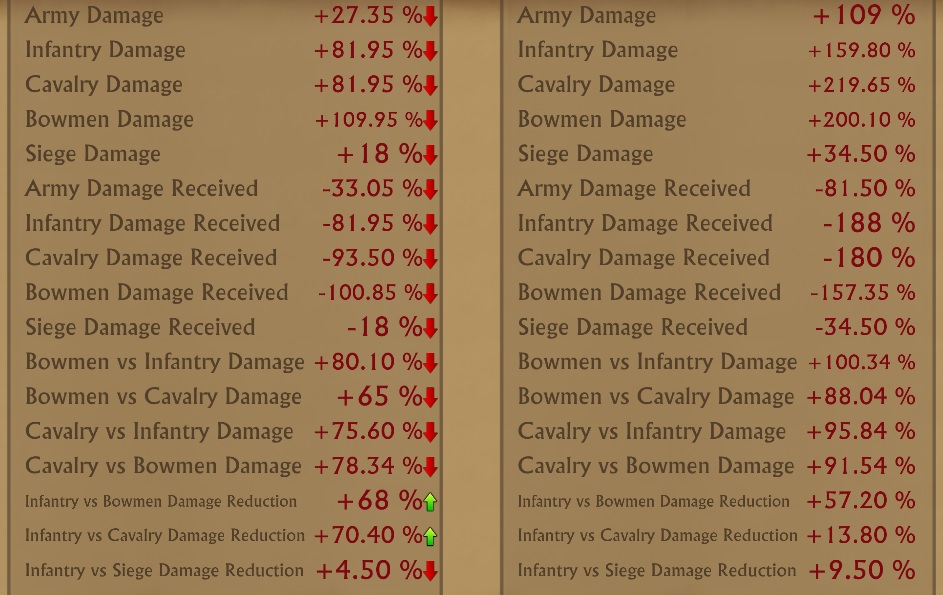 In above description we can consider that the damage based on the difference in Attack and Defense there is 100%. The Damage related buffs of the attacker increase this value and the Damage Received/Reduction buffs of the defender decrease this amount.

This part of the combat calculation is not directly related to the amount of troops you have, which means that extreme differences in Damage related buffs between attacker and defender can result in very weird battle reports. The one shown here is such a report. This is possible in situations where the damage reduction boosts of one player are more than 100% larger than the damage boosts of the other player, because in such cases the damage done by one of the players is cancelled out completely. I don't have the report anymore that I took these screenshots from, but likely the 50/50 survived/losses troops were from different troop types and the resulting damage against one of the troop types was 0.

It is good to understand that these damage and damage reduction/received buffs are separate from attack, defense and health and have a very important function. You should never focus only on Attack, Defense and Health, but make sure you focus on Damage and Damage Reduction/Received as well. If you have a choice (like with Building Prestige Levels), it might be better to focus more on Damage related buffs, as the Attack, Defense and Health buffs can be more easily acquired in other ways (e.g. Gemstones) as well.

Ways to get Damage and Damage Received/Reduction boosts

In this section we list the various ways in which you can get Damage or Damage Received/Reduction boosts.

The Guards also provide some boosts, although not very large. For Captain only if you get the purple Gustavus Adolphus up to 5 Stars will you get a nice Infantry Damage Received buff. For Weapons Master the 2nd Star 10% Distance Damage Boost of the green Lady Silver is still nice. The blue and purple guards give Damage related buffs with 3 and 4 stars.

I think these should be complete, but in case I missed any, please let me know in the comment section.

On a side note, some of the ways that are great to get Attack, Defense and Health buffs, do not provide ways to get any Damage buffs like Combat I and Combat II Research Categories and Gemstones.

I find the effect of the Damage related buffs to extreme. The results as shown in the combat report are too extreme, I think it was a mistake to allow Damage of one of the parties being reduced to zero by these buffs. In my eyes it would have been better if they somehow found a way to limit it so that both parties still do a minimum of for example 50% damage.

I do hope this guide helps to understand the results of combat and helps in focussing the development of your account to do better. If you have amy questions, or any further tips or explanations, please share.