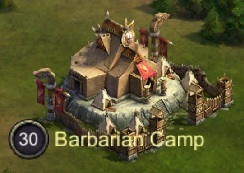 Explanation of how to make sure you get food from the Barbarian Rallies.

When you select a Barbarian Camp you can Attack it. If you select Attack, you first need to select from a list of opponents, and afterwards from different times before the rally start marching. Once you set the rally you need at least one of your alliance members to join your rally before it can march, as with other rallies. Setting a rally and joining it costs 20 Stamina points.

You need to consider that you roughly need the same amount of troops in your rally as as listed for your opponent if you don't have much boosts. Having lots of combat boosts greatly reduces the amount of required troops.

By using the Hunt button in the Kingdom Map view, you can find nearby Barbarian Camps.

Besides the level the opponent can also be a Cavalry, Bowmen or Master. The Cavalry and Bowmen each have a majority of that respective troop type, while a Master has a balanced army with the same amount of Cavalry and Bowmen.

The rewards you get from defeating a Barbarian Camp consist of 3 parts, Damage Loot, Victory Loot and Bonus Loot.

The Victory Loot are 1K Food items (the amount is the level of the opponent) a Barbarian Chest and optionally some seasonal event specific items (Carnival Beads at the moment of writing this guide) and Royal Coins for the older Kingdoms.

The Bonus Loot consists of a Bonus Barbarian Chest if you have at least one Barbarian Key.

The Bonus Barbarian Chests are the main way in the game to get Portal Dust, necessary for opening the Alliance Portal, so it is important that many people in your alliance rally the Barbarians, not only for their own benefit.

If you beat all opponents in a Barbarian Camp it will disappear, this might be useful in case you want to do Fallen Knights and you have a Barbarian Camp very close to your hive, so you give your members more time to react.

Players who want to lead Barbarian Rallies need to have a high level of their Hall of War, as this building is the main factor in determining how many troops can join a rally.

Each Barbarian Camp comes with a timer, but if the time expires after you have set a rally, everyone will get their stamina back.

If you lose a Barbarian Rally, you will get your Stamina back once your troops return to your city.

Barbarian Rallies result in a small amount of wounded troops.

I hope this explains how to deal with Barbarians Camps. If you have questions or you want to share tips for others, please leave your remarks in the comment section.