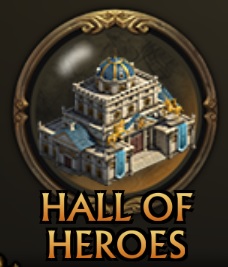 In April 2018, in the 1.7 Update, Guns of Glory was extended with a new alliance building, the Hall of Heroes. This guides gives insight in the various features of this new building and how you can benefit from it.

Guns of Glory Hall of Heroes

The Hall of Heroes consists of three parts: Hero Bounties, Alliance Celebration and Hero Achievements. There are more or less independent new functions that each can result in rewards. There is a common factor that you can achieve a new currency, Hero Coins, that you can spend in a shop inside the Hall of Heroes Store to purchase various goodies.

Via the Hero Bounties menu in the Hall of Heroes building any player can Raise a Bounty. The player raising a bounty can select the personal reward he will receive when the Bounty is completed successfully. The rewards chosen determine (at least) two aspects of the bounty, the amount of Hero Coins that need to be offered to start it, and the amount of points (Bounty Parcels) that need to be donated.

Once a Bounty is started the alliance has 12 hours to donate the required points. Donation is done with Bounty Parcel items via the Hero Bounties menu. These Bounty Parcel items can be acquired in various ways, below I list a table with ways known to me, please let me know in the comment section if you know other ways.

If a Bounty is completed successfully (enough Bounty Parcels donated within available time), the person raising the bounty will get its personal reward, the alliance gets some Hero Stature and Hero Jewels as rewards and each player donating get Hero Coins as reward (at the moment of donation).

When a Bounty fails the personal rewards and the Alliance rewards will be proportional to the amount of donations finished, while the bounty raiser gets the hero coins back for the part that was not finished.

Raising a Bounty is a way to get some items that are otherwise difficult to attain, like Aristocrat Badges and Intensity Gear (V).

Ways to get Bounty Parcels

There is a Bounty Log in which you can see all raised bounties with information about who raised them and whether they were completed successfully or not.

This feature seems similar to the alliance gift chests. Instead of daily there is a week time in which the alliance can score points via various activities. These are listed inside the Alliance Celebration screen and include activities such as gathering from the Alliance farm, defeating red guards and dealing damage to underworld villains.

As soon as your alliances reaches any of the point targets you will get an alliance mail informing you that a celebration chest has been unlocked. The contents of the Celebration Chests is determined by the Task that is selected (can be done at the beginning of each week when a new cycle starts). Only r4/5 can select the task.

The other task gives materials for the Creation equipment.

In update 2.9.0 a new task was introduced which gives Artistocrat Badges.

This store is setup in a similar way as the alliance store. The r4/5 can use the Hero Jewels to put items in this store, players can use their hero coins to purchase the items.

Price wise it does not seem very expensive, e.g. you can get a Raw Hope Gemstone (IV) fragment for 117 Hero Coins.

There is also a new weekly leaderboard ranking (weekly celebration points) that is based on the Hero Jewels players earn for their alliance by raising bounties. As far as I know this does not provide anything extra than a dubious bragging right.

At first it might seem like quite a lot of functionality for a new building (it did to me), but the Alliance Celebration and Hero Achievements sections won't require much of your attention, basically you just get some extra rewards for things you do anyway. The Bounties are a new way to get items you would otherwise find difficult to acquire, which is a nice introduction to the game.